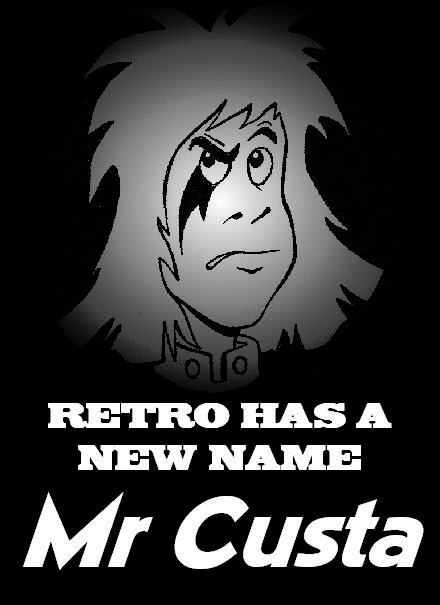 From then on, many more episodes were written and produced by West Midlands-born writer Philip Whitmore, and the show found a regular home as part of the Saturday Morning show “UpAndHappy!” presented by Lee Bannister.

Stories such as “Bad, Bad Buttercup” featuring a zombie pantomime cow, and “Labyrinth of Mars” in which Philip also played (among others) the part of the villain, Monty.

The “Mr. Custa” theme had been created by Michael Skywood Clifford in 2008.

As the series progressed, other writers proffered stories, such as Aaron Nicholas-Wood, Sara Beamish and Michael Skywood-Clifford.

This led to the expansion of the series as a whole. In November 2008, a Wolverhampton-based youth magazine, “Krash” published a two-page introduction to Mr. Custa in comic-strip format.

This story “The Moderniser” ran for six issues and was illustrated by Julianne Britton.

On the 5th December 2009, Mr. Custa was seen on stage as part of “Sitcom Saturday”, in a play called “Never A White Christmas”.

Although seemingly guest-starring in a “Captain Dad” story, the zany plot is definitely in the “Mr. Custa” style. For this showing, Mr. Custa was played by Kevin Golding.

On the 19th December 2009, Mr. Custa guest-starred in the “UpAndHappy Christmas Special” a 75 minute feature written by Phil Whitmore, where Mr. Custa transported the radio crew to Panto Land. The show then got a Boxing Day repeat. (it can be heard over on Dr Strangeglove’s Website)

2018: The New comic book adventures of “Mr Custa” are now available to view at the “Aces Weekly” website.

They are illustrated by Mychailo Kazybrid & Bambos Georgiou & published by David Lloyd.

Story one: “Negabots” is in “Aces Weekly” Volume 36… look in the Comic Strips section for a full illustrated episode guide.